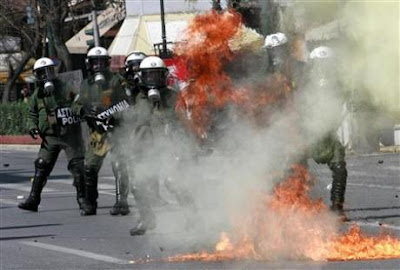 Greece has never seemed so far removed from its prehistoric glory as the civilization that brought us Hercules, Aristotle and the origins of democracy. Already in dire straits due to a national debt that exceeds gross domestic product, the Greek government is now battling widespread strikes that have effectively shut down all social and public services. On March 11, 2010, 20,000 protestors took to the streets, quickly escalating an already tense situation into an all out urban battleground by fighting police, smashing storefronts, torching cars amidst a frenzy of tear gas and stun grenades explosions. The rest of the European Union has thus far only observed the devolution of Greece, hesitating on a course of action. Greece’s desperate situation reveals the deep tensions underlying even strong regional identities like the European Union. In large part, Greece’s survival, along with that of the EU, will greatly depend on the resolution of the current debate on the limitations—if any—of regional obligations.

The financial crisis of 2008 ravaged Greece, which was especially vulnerable due to overspending, speculation, and failed attempts at fiscal austerity. The country’s deficit is currently at 12.7% with a national debt that surpasses the national economy at $413.6 billion. Greece’s credit rating slipped precipitously and by December of 2009 was the lowest in the eurozone. The government of George Papandreou was forced to abandon its campaign promises of social assistance to the poor and has instead proposed antithetical and steep budget cuts. However, analysts and investors were still doubtful that these cuts will solve any problems, as they were not seen to be sustainable. A new plan introduced in January of 2010 was highly criticized by unions who immediately organized strikes, which gradually intensified through February.

Greece’s situation has caused somewhat of a crisis of confidence for the European Union. Although Greece’s problems are largely domestic, the fact that Greece is a member of the EU means that the repercussions of the crisis reach beyond Greece’s borders. Greece’s poor credit rating and lack of confidence has also negatively impacted the euro, which has dropped steadily since Greece’s crisis began. There have been calls for the IMF, traditionally the lender of last resort, to assist Greece. Others have suggested that this is an opportune moment for the EU to flex its collective might to assist one of its own through the creation of a European Monetary Fund.

That said, the concept of a European Monetary Fund is extremely tenuous and would require a huge overhaul of EU structure. Critics of the fund have argued that it would effectively function as a crutch, weakening moral hazard by granting offenders a safety net. In addition, any changes to the existing structure of the EU face an uphill slough—the Lisbon treaty was only ratified after years of delays.

Some have encouraged Germany, as the strongest member of the EU, to come to Greece’s aid. But Germany has chafed at the idea of being the one responsible to dig Greece out of its self-made hole. More alarmingly, social cleavages have bubbled up to the surface, dragging up World War II memories. Germany’s Bild Newspaper has led attacks that are increasingly prejudiced, for instance contrasting hard-working Germans against lazy Greeks. In retaliation, one Greek lawmaker has suggested German reparations for Nazi occupation during World War II—a decidedly low blow that did little to assuage tensions. This sheds light upon one of the unresolved tensions of the European Union: inequality within the eurozone between large states and small states, north and south, or as one editorial termed it “grown-ups” and “children”.

Regardless of the disparities between member countries, the task at hand is a collective one. The Euro has inexorably intertwined the political economies of its member states. The implications for the entire eurozone have brought into question the limits of EU obligations and regional responsibilities, namely who, if anyone, should be helping Greece, and what type of aid should be utilized. This can be evidenced in the possible response measures being discussed: the formation of a brand new European Monetary Fund to deal as a personal lender of last resort or an IMF bailout for Greece similar to the ones it has given numerous other beleaguered nations. These appear to be the two extremes, but there are also numerous shades of grey in between. A European Monetary Fund may seem too drastic, but closer integration and more fiscal maintenance through existing structures like Eurostat have been proposed, and French President Nicolas Sarkozy has argued that a bailout plan should be supported by all member states.

As grim a situation as this is for Greece, it could prove to be the proverbial rock bottom, from whence the only direction is up. This is the EU’s chance to truly commit itself to being a regional community not just in terms of monetary policy, but also in terms of political economy. In addition, there is also the threat of aftershock defaults in nearby indebted states like Spain, Portugal and Italy. The resolution of the Greek economic crisis—whichever path it ends up following—will have important ramifications for the future identity of European Union. For now, the only thing that seems certain is that the status quo will have to change.