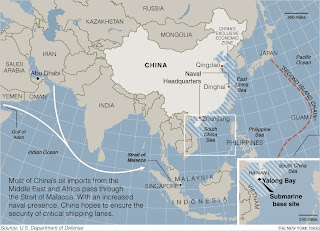 Not even a decade ago, China was totally absent from competition over oil, but today this emerging global power’s efforts to obtain long fought-after resources is a commonplace topic making headlines everyday. Propelled by its rapid economic development and rising competitiveness, China has become a central player in the global race to find oil deposits and gain self-sufficiency. This strategic move is perhaps not very surprising given the fact that industrialization and development accompanied by rising consumption have increased China’s demand for oil, putting pressure on the government to seek out more resources. It also seems natural then that the growing importance of oil and natural gas has led the government to secure its economic interests through military naval power.

Last week, the Chinese military announced that it will seek to project naval power beyond the Chinese coast to the Pacific shipping lanes that connect China to its oil ports in the Middle East, an area where the United States Navy has until now been the only dominant force. Chinese admirals want warships to escort commercial vessels from as far as the Persian Gulf to the Strait of Malacca in Southeast Asia to protect Chinese interests. In March, two Chinese warships made their first appearance in the Middle East at Abu Dhabi. Last month, Chinese officials told the Obama administration that the South China Sea was now part of its “core interest” of sovereignty and that China also intends to extend its reach to the Philippines, a zone that overlaps with the U.S. Navy’s area of supremacy.

The modernization of China’s navy has also been dramatic and unprecedented. Currently, the Chinese navy receives more than a third of China’s military budget, with the total budget estimated to be around $105 to $150 billion by the Pentagon. As part of its “far sea defense” strategy, China has tested long-range ballistic missiles that could be used against aircraft carriers. It plans to deploy aircraft carrier groups within the next few years and is developing a modern submarine fleet that can better protect vital transport of key resources. Already, a base in Yalong Bay on the southern coast of the Hainan Island has submarines that are able to reach deep water in the South China Sea within 20 minutes. A 2009 Pentagon report also estimates that China has a naval force of about 260 vessels and more than 60 submarines.

This growing assertion of economic interests is a marked change from China’s traditional policy of defending its own coasts and governing Taiwan. This is the first time China has ever asserted its “core interest” of sovereignty outside of Tibet and Taiwan. Chinese officials told senior American officials that it would not withstand any foreign interference in its territorial issues in the South China Sea, and both sides have clashed over the definitions of each country’s “exclusive economic zone” in the region. Although the Chinese have until recently been focused on domestic development and stability, its growing dependence on oil and other resources has shifted its attention outward. Not only is China seeking to extend its sphere of influence in other developing countries – most notably in Africa and Latin America – but is also now fortifying its sea lanes to further secure its vital economic interests.

Although the Chinese claim this expansion of naval power is for self-defense, these moves not only exacerbate its tensions with the United States but also create instability and anxiety across the Asian region. This announcement coincides with President Obama’s proposal to expand exploration in the United States coastline to reduce foreign dependency on oil and natural gas. Both countries are now competitors in the race to secure self-sufficiency in energy and gain control over oil deposits to maintain dominant positions in the global market. Furthermore, in the midst of U.S. pressure for Chinese currency revaluation, the announcement of extending naval influence in traditionally U.S. dominated sea lanes seems to be a symbolic move to show China’s growing self-confidence. China is asserting its own interests by changing the rules of the game initially established by the United States.

Of course, the expansion of the Chinese navy currently does not pose a significant threat to U.S. military hegemony. Although China’s navy may not be 20 years behind the United States’ anymore, its capabilities still lag behind those of the United States’ and China’s military spending is still relatively miniscule in comparison to the U.S. However, even if the Chinese navy poses no real threat to the U.S. and this military expansion is purely for defensive purposes, China’s recent actions still create growing tension and instability in the international community. Although the threat is not yet real, the possibility of China’s navy to challenging the dominant American presence in the Pacific is unsettling for many.