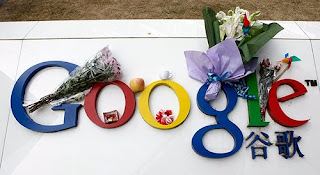 One month ago, on March 22nd, Google decided to step out of China and end four years of censoring the web for the Chinese government. Thus exited the world’s most powerful Internet company from the world’s most populous country. While only maintaining some R&D; and advertising activities in China, Google shifted mainland Chinese users from “google.cn” to “google.com.hk”. The company kept to an earlier statement it made in January that it would stop filtering information from Chinese Internet users.

Over the past four years, Google had been cooperating with the Chinese government to filter out sensitive political information and pornography from the web. While attracting intense criticism for compromising freedom of expression, Google argued that the benefits of allowing more of the Chinese population access to Internet information outweighed the costs. However, in mid-December 2009, Google started to detect cyber attacks from China on its corporate infrastructure. While the attacks were initially traced to a small vocational school, Google insisted that the level of sophistication of the attacks made it almost certain that the attacks were overseen by the government and the military. Furthermore, the attacks were directed at the Gmail accounts of Chinese human rights activists.

The cyber attacks exceeded the limit of how much Google was willing to compromise in order to stay in China. In a statement issued in January 2010, Google took a firm stance against censorship of information and refused to comply with the Chinese government. Over the following months, bitter verbal conflicts took place between Google and the Chinese government, and there was much speculation and debate about whether Google would eventually forsake the biggest Internet market in the world in defense of freedom. And in March, Google irreversibly decided to end its operations in mainland China.

To most people, leaving a country with one-fifth of the world’s population seems like a huge sacrifice on Google’s part. In fact, however, Google will suffer little commercial loss from the pullout. Google’s annual revenue in China is estimated at $300 million to $600 million, only a fraction of the company’s $24 billion annual sales worldwide. Instead, the biggest victims are likely to be Chinese companies. Two of China’s largest mobile companies, China Mobile and China Unicom, were forced to scrap lucrative deals with Google under political pressure. Moreover, many small startup companies who used to make their living through advertising opportunities on Google now have to find other alternatives.

Not only does Google not suffer much commercial loss from exiting China, its decision could actually be a smart business strategy in the short run. Indeed, over the past few years, Google’s compliance with the Chinese government attracted much unwanted criticism from the West. By taking a stand against an authoritarian government and defending freedom of expression, Google manages to evoke a positive corporate image in many people’s minds.

However, several problems await Google in the long run. First of all, the relationship between Google and the Chinese government has risen to such a point of hostility that it is now virtually impossible for Google to re-enter the mainland Chinese market. Secondly, by taking a stance against censorship, Google sets a high standard for itself that it might not always be able to meet, thereby opening itself up to future criticism. Indeed, if it refuses to censor information in China, how should it conduct itself in other countries that also allow censorship, such as England? In the future, Google might face a lose-lose situation in which its only options are to compromise its corporate image or forsake more lucrative markets.

While leaving China has relieved much political and social pressure from Google, the future looks rather ambivalent for the Internet giant.