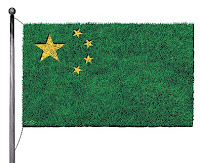 For years, China has been heavily criticized for its massive energy consumption and colossal volume of carbon emissions, the inputs and outputs of its rapid growth. Recently, however, China has made impressive strides in green energy development and pollution reduction – even surpassing the United States as the leader in clean energy investment for the first time in 2009. This has ironically resulted in a backlash of US sentiments against China’s ‘unfair’ trade dominance in the green energy sector.
Through the end of 2009, China—the largest industrializing nation— was castigated by the United Nations and in particular the United States for being the world’s leading carbon emitter. Indeed, China consumed over three billion tons of coal in 2008 and 2009, more than triple the amount used by the United States, and total energy consumption in China doubled in less than a decade this century. And at the Copenhagen climate change conference last December, China took much of the blame for the breakdown in talks.  However, with China taking effective action to capitalize on other sources of energy, global attention has shifted from the damage it has caused to the immense progress it is making in the arena.
China invested over double the amount that the United States expended on clean energy technology, spending a total of $34.6 billion as compared to $18.6 billion in the US in 2009. More specifically, it has not only become the world’s largest market for wind turbines, but also established itself as the largest global manufacturer of solar panels. As Chinese officials recently announced a plan to spend $75 billion a year on clean energy, China’s swift progress in the industry does not appear to be stalling anytime soon. Of course, China’s development of green energy does not necessarily mean that it will actually reduce its usage of coal or other conventional energy sources – but one should at least give it points for trying. Moreover, China has made efforts to assume a leadership role in global environmental cooperation. It is hosting a UN conference on climate change this week. Although little tangible progress is expected to ensue from this conference, it demonstrates China’s realization of its responsibilities as a major world player as well as its emerging desire to create change on the global forefront. China’s investment in green technology has appeared to pay off, as its exports increased over 500% to around $27 billion between 2004 and 2008. However, this has also incurred heavy political cost.
US lawmakers and trade unions alike have criticized China’s moves in the green energy industry, saying that it employs “predatory trade practices…to give its manufacturers an unfair advantage in the green technology revolution.” In addition to a letter from 180 congressmen, the USTR also received a 5,800-page petition from the United Steelworkers union. This document accuses China of using billions of dollars in subsidies, performance requirements, preferential practices and protectionist and predatory activities to dominate the solar and wind industries and other clean-energy sectors. The USTR has until October 24th to decide whether to accept the petition, which could mean a WTO-level dispute if accepted. China flatly rejected the complaint, stating that such comments were hypocritical when China is under pressure to cut greenhouse gas emissions. Despite the litany of new trade-related complaints the US has generated about China, the old criticisms remain in place. At the ongoing climate change conference, both countries again disagreed over the issue of whether developed or developing countries should bear more responsibility for carbon emission reductions, and the possible establishment of a mechanism to verify such reductions. All of these developments reflect the mounting tension between China and the United States over China’s new green energy policy.
What insights can we draw from this state of affairs? First, the United States should perhaps take the time to think about long term considerations before pressing other countries to take up any course of action. As seen from this example, US criticism of China’s energy consumption caused it to turn towards alternative sources of energy, yet that again fueled the ire of the United States. Should the US decide to pursue its complaints against China’s green energy developments, it could result in severe bilateral conflict with China. Worse still, it could affect the green initiative on a global scale by making other countries question how seriously they should commit towards environmental responsibility given the US reaction to China’s efforts. Next, even if even if it was a mistake for the US to point fingers a little too early, this example still highlights the ease with which noble causes like climate change can be used as a screen behind which unfair trade or protectionism lurks. We should not just be aware of this possibility, but also begin to think about how such developments can be mitigated. Lastly, the spat between China and the United States reminds us that the critical issues of global warming and climate change really require genuine global cooperation, not the pushing of responsibility or a race for individual limelight. If only each country could focus on doing what is best for the earth, instead of what it is best for its interest groups, we would be able to see a far greener world.
Image courtesy of http://venturebeat.com/2009/12/28/china-makes-nice-after-copenhagen-passes-green-energy-law/.